Barbara Barnett is Co-Executive Editor of Blogcritics, an Internet magazine of pop culture, politics and more owned by Technorati Media. Always a pop-culture geek, Barbara was raised on a steady diet of TV (and TV dinners), but she always found her way to TV’s antiheroes and misunderstood champions, whether on TV, in the movies or in literature.

Barnett’s regular column, “Welcome to the End of the Thought Process: An Introspective Look at House, M.D.” features insightful episode commentaries and interviews with the House cast and creative team. It is the place for intelligent discussion of the hit television series starring Hugh Laurie.

Barbara has had an eclectic career. With an undergraduate degree in biology and minors in chemistry and English, she pursued a PhD in Public Policy Analysis after spending a few years working in the chemical and pharmaceutical industries. Her first professional writing gig was with a food industry trade magazine, and although it wasn’t exactly like writing for The New Yorker, it completely hooked her on the profession of writing.

She also writes lots of other things, including technology (from a non-geek perspective), the movies, politics and all things Jewish. Based in the north shore suburbs of Chicago, Barnett is married with two brilliant children and a dog. Chasing Zebras: The Unofficial Guide to House, M.D. is her first (commercial) book. She hopes it’s not her last. 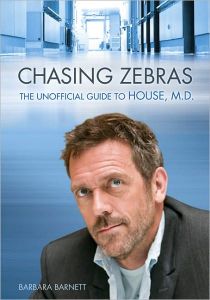 Q: Thank you for this interview, Barbara. Can you tell us what your latest book, Chasing Zebras: The Unofficial Guide to House, M.D. is all about?

CZ is a comprehensive exploration of the hit television series House, M.D. It’s written in two parts. In the first, I take apart the show’s storylines, character histories, bits of social commentary and more. My aim is to understand the series narrative, central character Dr. Gregory House and all in his orbit. I look at everything from the series connections to Sherlock Holmes to the music, sets, etc. I also look the often provocative social commentary: what does the series say about ethics, religion and God, patient rights and more. The second part of the book is an episode by episode dissection. It summarizes each episode, but also hones in on the highlights: how was House a jerk, what was the episode’s ethical dilemma? What was House’s eureka moment? What was the most important relationship moment? But even in this section, I delve deeply into many of the episodes with “Closer Look” essays.

Q: How did you come up with the idea?

I’ve written a very widely read blog called “Welcome to the End of the Thought Process” for Blogcritics Magazine since 2007 (I recently became the magazine’s co-executive editor). I wanted to find a way to dig even deeper into the episodes, story arcs and characters than was possible within the scope of a blog.

Q: What kind of research did you do before and during the writing of your book?

In addition to watching every episode numerous times, I also consulted with psychologists (House suffers from an entire constellation of emotional issues), Holmes bloggers, medical texts to understand the diseases encountered in the series, as well as pain management sites to understand better the nature of House’s chronic pain/drug issues.

Q: If a reader can come away from reading your book with one valuable message, what would that be?

Q: Can you give us a short excerpt?

From the Introduction to Chasing Zebras:

Dr. Gregory House is an unrepentant jerk. He’s rude, brusque, and harsh — suffering no fools and taking no prisoners. He’s not conventionally pretty; he’s not young. In addition, he’s crippled, limping along with a cane. Yet, he’s the central character on the hit television series, House, M.D. (just House, for short).

It’s a completely unlikely proposition. How do you sell the network on a series created around such an irredeemable bastard? Who would even want to watch it? Millions do.

House is one of the highest-rated television series on American television. More than that, it’s a hit around the world — from the United Kingdom, France, Spain, Eastern Europe to the Middle East, and in lands as far flung as Australia and Hong Kong. In Canada, House has even outranked American Idol!

Eurodata TV Worldwide, which tracks and ranks television across the globe, reported in June 2009 that House was the most-watched television show worldwide, with nearly 82 million viewers tuning in from 66 countries. Why would more than 80 million viewers tune in week after week to see Dr. Gregory House verbally spar with his patients, staff, and colleagues at Princeton-Plainsboro Teaching Hospital? There has to be something more to it (and to him) than just a brilliant jerk packing a stethoscope and a toxic tongue.

Is it the bizarre medical cases? That’s probably one reason, and the starting point for most episodes. Inspired by physician Lisa Sanders’ New York Times feature “Diagnosis,” the House writing team, with creator David Shore at the helm, conjure the most unusual of cases, fitting for an elite Department of Diagnostic Medicine.

Perhaps the series owes its success to the snappy dialogue: the quick wit and rapid-fire pace of the writing. The show’s scripts are certainly dense and swiftly paced: a stark counterpoint to the physically disabled and slow-of-foot Gregory House. And the humor, with its one-liner “House-isms” and snarky banter, supplies balance to the intensity of the weekly medical and character stories.

Or do people simply live vicariously through House’s unfiltered voice? He is certainly capable of saying things the likes of which we normal, well-adjusted worker bees can only dream. Some may be intrigued by House’s uniquely personal code of ethics. Or perhaps House’s personal struggles resonate with us.

Much credit in making House compelling television goes to the nuanced and genuine performance of Hugh Laurie, who stars as the genius diagnostician with serious personality issues. Through his expressive eyes and masterful acting, Laurie’s flawless interpretation of House’s frustrations, fears, hopes, and hurts guides us through House’s morass of bullshit and elaborate game playing and deep into his heart and soul.

It’s ironic that executive producer Bryan Singer, the director of the House pilot, had difficulty casting the role of the quintessentially American Gregory House with an American actor. It was not until Laurie, legendary British comedian (and novelist, musician, and actor), sent in an audition tape, complete with perfect American accent, that Singer found an “American” actor capable of handling the complex role. But perhaps that’s because Dr. Gregory House has more in common with a particular English literary hero than he has with any American television character.

Take a classic British literary hero, bring him into 21st century American medicine with a vengeance, and create a modern television phenomenon. The parallels to House’s literary grandfather — Sir Arthur Conan Doyle’s 19th century detective Sherlock Holmes — are many and intentional. House . . . Holmes; Wilson . . . Watson. Holmes fiddled with his fiddle; House plays piano and guitar. Both House and Holmes reside at 221B. Holmes solved cases with associative leaps — a combination of genius and deductive reasoning, superheroic observational skills and deep intuition about the human psyche. So does House.

Like his Victorian ancestor, House applies logic, reasoning, an encyclopedic knowledge (of everything), plus his intuition to solve medical mysteries and save lives. Holmes uses cocaine to forestall boredom; House uses Vicodin for more than just the pain in his leg.

Unlike the British Sherlock Holmes, House is very much American. Yet, the Eton- and Cambridge-educated Laurie — a quintessentially British actor —completely captures the character. It’s no accident that Holmes fans have often suggested Laurie as the heir apparent to the role of Holmes.

But Sherlock Holmes isn’t House’s only literary or pop culture ancestor. House’s heritage includes a long history of literary and cinematic heroes and antiheroes. Part Byron, part Sherlock, a bit of Quincy, M.E., perhaps a hint of Dr. Kildare’s mentor Gillespie, some of the The Dark Knight’s Batman, and a generous dollop of truth-seeking antihero Fox Mulder (The X-Files), House joins the ranks of classic dark angels and iconoclast

Q: In your own experience, is it hard to get a nonfiction book published today?  How did you do it?

The publishing industry is very tough these days and very much in transition. I was incredibly fortunate to connect with a wonderful agent who found the perfect home for the book.

I have a project in proposal stage right now with my agent. I don’t want to talk much about it (bad luck), but it’s a pop culture treatment.

Q: Thank you so much for this interview, Barbara.  We wish you much success!