Read-a-Chapter: Rowena and the Dark Lord, by Melodie Campbell

Read a Chapter is *NEW* added feature at As the Pages Turn! Here you’ll be able to read the first chapters of books of all genres to see if you like them before you buy them. Today we are featuring the comic, time-travel romance, Rowena and the Dark Lord, by Melodie Campbell. Enjoy! 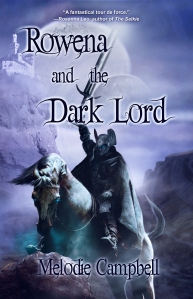 When Rowena is abducted from Arizona and taken back to medieval Land’s End, one thing is clear: she must learn to control her powers of magic. It isn’t easy being a modern girl in an archaic land, and when Rowena accidently conjures up a Roman Legion in mid-battle, Land’s End is on the brink of a war that could jeopardize everything and everyone she loves.

The stakes are raised when the Dark Lord reappears and traps Rowena in a cyclone of lust and passion. Once again, she is torn between the man she loves and the mage who fires her desire.

Purchase the book on Amazon.

ROWENA AND THE DARK LORD

The trouble with walking through walls into alternate worlds is you’re an illegal alien when you get to the other side.

“I have to work at something, Rowena.” Thane was pacing my townhouse kitchen with the intensity of a caged tiger. “I can’t be a kept man.”

I sighed and look down at my hands.

Trouble in paradise. This is what I didn’t consider when I pulled Thane through the wall with me from medieval Land’s End into the 21st century.

We’d only been in America for a few weeks. And they had been glorious so far. To know you are loved by another such that they would give up their world—actually their Kingdom—for you is a powerful aphrodisiac.

Now we had enjoyed the luxury of many days together. Enough time to teach Thane how to drive a car, which he adored to the point of obsession. But not enough time to figure out what he could do with his life in modern USA.

Thane didn’t have a social security card. He didn’t have a birth certificate, or any proof of education. And he couldn’t read English. How the heck was he going to get a job in Phoenix, Arizona?

“You could volunteer,” I said hopefully. “People don’t usually ask for identity cards when you volunteer.”

“At what?” Thane stopped pacing and stared at me. His ocean blue eyes were wild. “I’m a classical Greek and Latin scholar and an expert swordsman. How many volunteer positions do you see for these talents in your modern world?”

I was feeling miserable now. It would take me some time to teach Thane how to write English, and that was only the beginning.

Truly, we had escaped Land’s End without thinking of the consequences. How much easier it had been for me to fit into Thane’s world of the middle ages! Was it just that women adapted better to new environments?

“Please don’t worry so,” I pleaded. “You know I’ll think of something. Give me a little time.”

He had his broad back to me now. His heavily muscled arms crossed his chest. I could see he was gazing out the living room window, to the expanse of desert beyond. A lone Saguaro cactus loomed tall amongst the sprawl of lower teddy-bear cacti and Sonoran shrubs. I could almost feel what he was thinking. The lone Saguaro…

“I must work at something, my love.” Thane’s hypnotic baritone voice was sad now, weary. “I can’t bear to see you go to work to support us both. ‘Tis worse, that I know a babe is coming.”

The sad thing was, this baby wasn’t his. He knew that, of course. I had been married to his older brother Sargon, who was now dead. Thane assumed he was the natural uncle of my child to be.

We had left Land’s End to escape Cedric. Cunning, irresistible Cedric…my distant cousin was a powerful wizard, just as I had been born a sort-of witch (to my great surprise—I didn’t know it until recently.) Cedric had bound me to him with magic more powerful than I could resist. And yes, God help me, there was to be a child from our union, in six months’ time.

It was Cedric’s child. I knew that now for sure.

But Thane did not.

“Do you miss Land’s End, Thane?” It had been haunting me for several days, that need to ask, even if I didn’t want to hear the answer.

He swung back to me and sighed.

“Yes,” he said. “If truth be told, yes. I miss the familiar. The deep greens of our earth, the orange blaze of sun in the sky. Our two moons shining at night. Your world is more muted. It’s restful, but I don’t want restful.”

With a start, his energy surged. He returned to pacing. “Oh, I can train here. I can stay physically fit. But I am a man of my times, Rowena. I like to wear armor. You have no idea how it makes a man feel. To strap on chainmail and feel the weight of a sword in your hand! I was born to it. And while I value books and book-learning, I also love physical challenges. The rush of adrenaline that courses through your body in one to one combat—by the Gods, how I miss that! The clang of metal on metal…” One fist struck the other hand over and over.

I was dismayed. This was the answer I had dreaded. He must have caught sight of my face. His voice softened slightly.

“But most of all, I miss the supreme contentment of knowing my place in the world. I was King there, Rowena—King! But that’s not the worst of it.” He paused.

I waited for it.

“I am plagued with guilt. I left my people…”

There was a catch in his voice. This was the emotion I had anticipated. Oh, I knew it had to be there, lurking in the dark, but he had hid it well until now.

“I left my brother Rhys to face that villain Cedric without me. Logan, too. I left my troops, my people. ” His voice broke with bitterness. “This is the worst of my sins. That I might do it again, to be with you. That’s the hell of it, my love.”

Sorrow cut through me like the sword he still cherished.

“We could go back,” I whispered.

I don’t know if he heard me. The front door swung open and hit the wall.

“Hey guess what?” Kendra’s sunny voice filled the hall. “They have a medieval festival in town! It’s in the paper—see?”

She bounced up to greet us with Richard on her heel. What a contrast they presented—I had to smile.

Kendra with her black bobbed hair and goth wardrobe was a full foot shorter than Richard. She bounced around him like a cyber-punk Tigger. Richard looked for all the world like Richard the Lion heart—blond, two meters tall, broad-shouldered and built to wear chainmail.

His natural state was to gaze at her with adoration. He didn’t appear as yet to be experiencing the angst that tortured the man I loved. Of course, Richard loved cars and all things that the modern world had to offer. He had taken to it like a lion to the chase.

Kendra waved the paper in front of my face. “They’ve just set up in a field past Apache Junction. Can we go, Row? We have to go!”

I took the paper dutifully and scanned it. These medieval times festivals were a yearly thing in Arizona. I had never been before. Maybe it would distract us?

“Thane, what do you think?”

He turned around and shrugged. His face was impassive.

“Oh Thane, don’t be a wienie,” said Kendra. “It’ll be just like being in Land’s End. Of course we have to go. And we need to dress up in our clothes from Land’s End. Oh, we’ll be the most well-dressed people there! Or at least the most accurate. It’s going to be fun!” She did a little dance in the centre of the kitchen.

That’s when I had my first feeling of dread.