Interview with C.W. Gortner, Author of “The Tudor Secret”

C.W. Gortner is the author of the acclaimed historical novels The Last Queen and The Confessions of Catherine de Medici. He holds an MFA in Writing with an emphasis on Renaissance Studies from the New College of California. In his extensive travels to research his books, he has danced a galliard in a Tudor great hall and experienced life in a Spanish castle. He is also a dedicated advocate for animal rights and environmental issues. Half-Spanish by birth, he divides his time between Northern California and Antigua, Guatemala.

The Tudor Secret is the first book in Gortner’s The Elizabeth I Spymaster Chronicles series.

You can visit the author online at www.cwgortner.com or his blog at http://historicalboys.blogspot.com/.

Q: Thank you for this interview, C.W.  Can you tell us what your latest book, THE TUDOR SECRET, is all about?

Set during the tumultuous final days of the reign of King Edward VI, The Tudor Secret tells the story of an orphaned squire, Brendan Prescott, who is raised by the powerful Dudley family and brought to court, where he becomes a spy to protect Elizabeth Tudor from a deadly plot and unravel the secret of his own mysterious past. It’s a fast paced suspense thriller, exploring a different side of the Tudor era – an underworld of intrigue, ambitions, and deadly secrets.  While the Tudors have been covered from nearly every angle, nothing I’ve read had ever explored the possibility that Elizabeth may have had her own secret spy, someone devoted to her special interests— and someone who ended up becoming her close friend even as he roused the lifelong enmity of her lover, Robert Dudley. This is the premise behind The Tudor Secret and the next novels in this projected series called the “Elizabeth I Spymaster Chronicles” (“Elizabeth’s Spymaster” in the UK).

My main character, Brendan, is fictional. I modeled him on the bits of information we have of other known spies in the Tudor era, as well as the archetypes of historical heroes from such authors as Rafael Sabatini and Alexander Dumas. Brendan is the quintessential ordinary man, unaware that he harbors a secret that is capable of overturning his world. This secret will both exalt and condemn him to a life of secrecy. Brendan interacts with several famous figures from the time, including of course the incomparable and enigmatic Elizabeth, as well as her ambitious friend, Robert Dudley, and her canny protector, William Cecil. However, unlike other accounts featuring these well known persons, I’ve strived to depict a different side to them— one more in sync with their historical personas. Though some readers may be surprised by my characterizations, I believe it’ll also make for more exciting reading.

This is the first novel where I worked with fictional characters from my imagination as well as historical ones. However, even with these fictional people, I did my best to make them realistic to their time. For example, Brendan’s sidekick, the stable boy Peregrine, is modeled on the hundreds of anonymous boys who found employment in the lower ranks of court. And Brendan’s overseer, the steward Archie Shelton, is based on the veterans of Henry VIII’s Scottish wars who found employment in noble households. And when working with real people, like Elizabeth, there is a certain amount of imagination that comes into play, for while we may know a great deal about her life, less is known about her inner emotions. I therefore had to learn everything I could about Elizabeth in order to craft my own unique portrait of the flesh-and-blood woman she might have been. 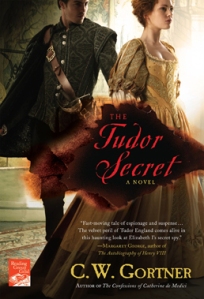 With The Tudor Secret, I was consciously aware of the plot before I began because I wanted to interweave two storylines: the historical one and the ‘what-if?’ As in, what if Elizabeth had gone to court to find out what had happened to her brother Edward? What if she met a squire to her childhood friend, Robert Dudley, who was then lured into spying for her? And what if this spy began to learn about a heinous plot threatening her life? Still, even with as much advance planning as I did, stories have a way of going their own way and characters can surprise you.

Q: Your book is set in Tudor England.  Can you tell us why you chose this era in particular?

The Tudor era offers an especially rich and dynamic arena for a writer to explore, in that within a relatively short span of time so much happened politically and socially. The drama, intrigue and tumult of the Tudor world have, for good reason, captured generations of readers; it seems there’s always something new to discover. I knew that Elizabeth’s supporters developed one of the most sophisticated intelligence systems in the world to protect her, as she faced enemies both in England and abroad for most of her long reign. But I’d never stopped to consider what being a spy for her might entail or what that service might have looked like before she assumed her throne. This conjecture is what inspired the plot for The Tudor Secret.

Absolutely. The Tudor era, and much of the 16th century, was for most part a time of both extreme glamour and extreme brutality— the gorgeous pageantry of the court in stark contrast to the degradation and poverty experienced by so many people, the abuse and corruption of the government, as well as the ambition of the nobility. And such famous places as London’s Palace of Whitehall and the fearsome Tower are essential components of my story. For the characters, the threat of being imprisoned in the latter while navigating the treacherous halls of the former are inescapable parts of their existence and make the story all the more thrilling.

My lead character, Brendan, is trying to persuade Elizabeth Tudor to accept his master, Robert Dudley’s, ring. Elizabeth has just discovered that she will not be allowed to see her brother and is understandably upset. Brendan risks his entire future, perhaps even his safety, if he does not deliver Dudley’s gift.

In spite of my apprehension at our reunion after ten years, he was a sight to behold. I had always secretly envied him. While mine was an unremarkable face, so commonplace it was as easily forgotten as rain, Robert was a superlative specimen of breeding at its best; impressive in stature, broad of chest and muscular of shank like his father, with his mother’s chiseled nose, thick black hair, and long-lashed, dusky eyes that had certainly made more than a few maidens melt at his feet.

He possessed everything I did not, including years of service at court and, upon King Edward’s ascension, prestigious appointments leading up to a distinguished, if brief, campaign against the Scots, and the wedding and bedding, or vice versa, of a damsel of means.

Yes, Lord Robert Dudley had everything a man like me could want.

And he was everything a man like me should fear.

Q: Thank you so much for this interview, C.W.   We wish you much success!

Thank you for having me! I hope your readers enjoy THE TUDOR SECRET as much as I’ve enjoyed writing it. To learn more about me and my books, as well as access special features, please visit me at: http://www.cwgortner.com.

There are two great book giveaways going on today!

C.W. Gortner is giving away a copy of his latest historical fiction novel, The Last Queen! Stop by Cafe of Dreams, leave a comment, and April will pick a winner! Is that the most beautiful cover you’ve ever seen?

Therese Fowler is giving away a copy of her latest women’s fiction novel, Reunion! Stop by Savvy Verse & Wit, leave a comment, and Serena will also pick a winner! Another beautiful cover from such talented authors!

Hurry, all you have to do is stop by and say hi, shoot the breeze, say hi to the authors, anything your heart desires. And, wait, there’s more!

Every month Pump Up Your Book Promotion chooses someone who has commented to win a free virtual book tour if you’re an author or a $50 gift certificate if you’re not! What do you have to lose???

Stop by, leave your comments on the appropriate blogs, and good luck!