On the Spotlight: WRITE TO DIE, a legal thriller by Charles Rosenberg 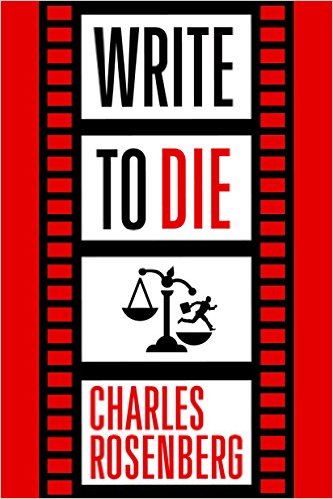 WRITE TO DIE, Charles Rosenberg’s blockbuster legal thriller is set against the backdrop of Hollywood’s entertainment industry, and marks the debut of a new series. Write to Die introduces protagonist Rory Calburton, a former Deputy DA turned entertainment lawyer who is swept up in the trial of a lifetime when murder hits the heart of the movie business.

A sensational tale informed by Charles Rosenberg’s decades-long legal career, Write to Die sizzles. With its seemingly ripped-from-the-headlines storyline, exhilarating plot, and pulse-pounding action, Write to Die heralds the advent of an outstanding new mystery series. Resplendent with realistic courtroom drama, richly drawn characters that spring to life within the novel’s pages, and an insider’s view of the inner workings of Hollywood, Write to Die is to die for.

About Write to Die

Hollywood’s latest blockbuster is all set to premiere—until a faded superstar claims the script was stolen from her. To defend the studio, in steps the Harold Firm, one of Los Angeles’s top entertainment litigation firms and as much a part of the glamorous scene as the studios themselves. As a newly minted partner, it’s Rory Calburton’s case, and his career, to win or lose. But the seemingly tame civil trial turns lethal when Rory stumbles upon the strangled body of his client’s general counsel. And the ties that bind in Hollywood constrict even tighter when the founder of the Harold Firm is implicated in the murder. Rory is certain the plagiarism and murder cases are somehow connected, and with the help of new associate Sarah Gold—who’s just finished clerking for the chief justice—he’s determined to get answers. Will finding out who really wrote the script lead them to the mastermind of the real-life murder?

Charles (“Chuck”) Rosenberg is a Harvard Law School-trained lawyer who has been a partner in a large, international law firm and, simultaneously, an adjunct law professor who has taught numerous law school courses, from copyright to criminal procedure. He received his undergraduate degree from Antioch College and has served as the credited legal script consultant to TV’s The Paper Chase,L.A Law, The Practice and Boston Legal, a full-time on-air legal analyst for E! Television’s O. J. Simpson criminal and civil trial coverage, and a former board member of the Taos Film Festival. He is author of the bestselling Robert Tarza legal-thriller trilogy: Death on a High Floor, Long Knives and Paris Ransom, andThe Trial of O.J.: How to Watch the Trial and Understand What’s Really Going On,a trial watcher’s guide to the O.J. Simpson trial. Chuck practices law in the Los Angeles area, where he lives with his wife. He is currently at work on the second book in the To Die series. Visit www.charlesrosenbergauthor.com for more information.