Read a Chapter is *NEW* added feature at As the Pages Turn! Here you’ll be able to read the first chapters of books of all genres to see if you like them before you buy them. Today we are featuring the YA fantasy, Lucas Trent 3: Grand Theft Magic, by Richard Blunt. Enjoy! 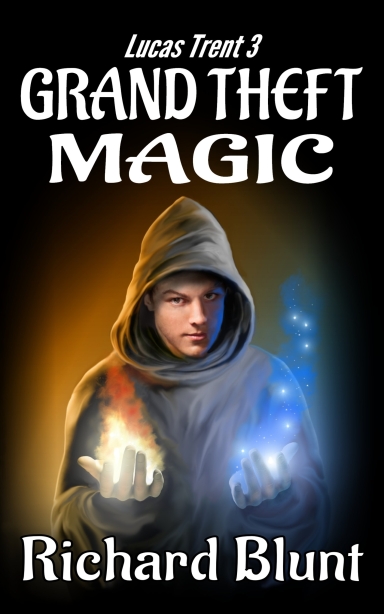 After a field trip suddenly turns into a near catastrophe Lucas and the others shift into high gear to avenge their injured friend. But when an unexpected foe arrives at the scene they quickly find themselves in a life or death situation that not even their extraordinary skills can solve. Realizing that they have bitten off more than they can chew Lucas desperately starts looking for trustworthy allies, just to find out once again that things are never as easy as they appear at first.

Can they survive the battles at hand? Will they be able to tell friend from foe? Or will the epic quest they have stumbled into be too much for them to handle?

Follow Lucas Trent and his friends through an action-paced story of mysteries, secrets and deceptions and find out…

It was a cold December day; the year was 2008. Within the corridors of a chemical plant near Luton, England, a teenage boy was running behind two security guards.

“I know that he is here somewhere,” the boy said after running around a corner. “I saw him go that way.”

“I saw him, too, but it seems that he is gone now,” one of the guards said. “Damn thief. Almost like a phantom.”

The guards walked around another corner, continuously looking. The boy continued down the corridor he was convinced he had seen the thief run into. He walked it up and down twice before he spotted the shadow behind a closet.

Immediately a figure jumped out of the shadow, dressed in a black suit, looking like a modern day Ninja. He ran off through the corridor, the boy in pursuit. After having chased him through a number of hallways, they finally approached a dead end, with only office doors alongside and a small window almost two meters above ground level at the far end of the brick wall.

“Stop. You have nowhere else to go,” the boy yelled.

But the thief had no intention of complying. With an impressive jump, he plunged through the half-open window out into the yard.

“Damn it, what kind of circus clown is that?” the boy cursed. But he didn’t slow down and jumped through the windowalso, following the man in black.

“Base, Base, this is team four,” the security guard that followed a few meters behind yelled into his radio. “The thief has left the building through a window. He should be on the meadow, west of the main entrance.”

“Base copied,” a voice said. “We will send a team immediately.”

Another security team instantly raced out the front entrance to the described area. When they were halfway there they heard two gunshots and in response immediately drew their own weapons.

“Shots fired, shots fired,” the second man in the team yelled into the radio.

When they finally came around the corner, they saw someone lying in the grass.

“Man down, man down. Send an ambulance,” the guard yelled into his radio again.

The first guard continued on around the next corner, while the second one approached the body. It was the teenage boy, lying there unconscious, blood soaking his jacket and his jeans.

“They are gone.” The second guard now also approached the boy as well, holstering his weapon.

“Hold on, boy, hold on. Help is on the way.” The guard had taken the boys hand, pressing it firmly.

Only two minutes later, the ambulance arrived on scene, with three men jumping out of it immediately. The guards made a few steps back.

“Multiple gunshot wounds,” the medic commented. “One in the leg, one in the lower back.” He then started touching and tweaking the boy before continuing, “Patient is alive but unconscious. We need to get him to a hospital ASAP. Jimmy, get the spine board; Paul, see if you can get us a helicopter.”

The other two ran off while the first one started carefully cutting through the boy’s jacket. He had just started giving him fluids intravenously when Jimmy returned with the spine board.

“The bird can be here in 15 minutes at best,” Paul yelled from the car.

“Too long, by that time we can have him at Luton General ourselves,” the first one replied.

He and his colleague carefully moved the boy onto the board and carried him into the ambulance.

“We are heading for Luton General,” he then said to one of the guards. “Please inform the boy’s parents.”

He then jumped in, closed the door and signaled the driver to go. Then they started supplying the boy with oxygen and giving him medication.

“He is coming around,” the second man in the ambulance said.

The boy reached for him and pulled him down to his face.

“Guardian…,” he said with a very weak and shaky voice.

“Yes, your parents have already been informed. They will be with you at the hospital,” the medic replied, smiling at the boy. “Hold on, we are almost there.”

“No.” The boy weakly shook his head and pushed the oxygen mask aside. “Not parents… Guardian….” He coughed and closed his eyes in pain, tears running out of them. “Guardian…,” he then continued with an even weaker voice. “IT College… Lucas… Trent… Darien… Stance… Call them… Please…” With that, he faded out again.