Read-a-Chapter: The Sons of Jude by Brandt Dodson

Read a Chapter is *NEW* added feature at As the Pages Turn! Here you’ll be able to read the first chapters of books of all genres to see if you like them before you buy them. Today we are featuring the crime thriller, The Sons of Jude, by Brandt Dodson. Enjoy! 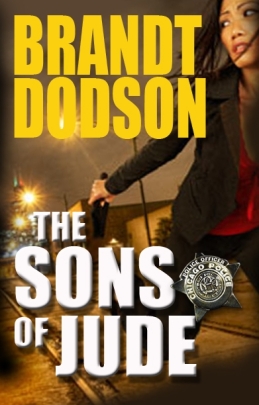 When Chicago detectives Frank Campello and Andy Polanski are assigned to investigate the murder of Trina Martinez it seems like an ordinary homicide. An unfortunate young girl in the wrong place at the wrong time has been brutally murdered. But their investigation is halted by a wall of silence, a wall erected by powerful interests that will render their inquiry a lost cause.

Then they enlist the support of reporter Christy Lee – and come under immediate fire. Polanski is arrested. Campello threatened. Christy is attacked.

It’s the case that every cop gets. The one that changes his life. The one where justice is elusive and the hunter becomes the hunted.

Frank Campello and Andy Polanski are The Sons of Jude.

Detective Frank Campello stood in the doorway of the 28th district’s second floor squad room.  It was his first day back since the shooting, and everything looked the same.  Gun-metal gray desks stood nose to nose, the walls were still covered in nauseating beige, and the sound of hushed conversations filled the room, punctuated only by the occasional ring of a phone or the squeak of a chair. Everything was the same – except for Rand’s riderless desk.

Campello passed his late partner’s work station and slid out of his black leather jacket, draping it over the back of the chair.  A swarthy looking man of stocky build with close-cropped black hair and deeply-set brown eyes,  Campello preferred casual clothing to the department’s more generally accepted business attire.  On this day, he wore a black long-sleeved shirt that clung to his muscular frame, brown slacks and cordovan loafers.  A Sig-Sauer nine millimeter pistol rode on his right hip.

Taking his CPD mug to the coffee maker at the rear of the room, he met Detective Angelo Silvio.

“Welcome back, Frank.”  Silvio was stirring non-dairy creamer into his coffee. “I’m sorry about Rand.  He was a good cop.”  He tossed the stir stick into the receptacle and lifted the cup to his lips, pausing to blow before drinking.

“Thanks Angie.”  Campello filled his mug and returned the carafe to its nook.  “It’s hard to believe he’s gone.”

Silvio sat on the edge of the table that held the coffee maker.  “Things like this are always hard to believe.  How can a man like that, so full of life, be here one day and gone the next?”  He shook his head.  “It doesn’t make sense, Frank.  It just doesn’t make sense.”

“I’m sorry about Rand,” said Shelly Tertwiller as she approached. “I know you two were close.”  Tertwiller, a recent transferee to the 28th, was a detective with just two years less time on the department than Campello’s twenty.  Her coffee-colored eyes studied him from beneath a furrowed brow.  “You ok?”

“I know everyone says this, but if there’s anything you need …”

“For what it’s worth, the buzz around here says you’ll come out fine on the other thing.” She was referring to his hearing before the IPRA, the all-civilian review board that replaced the previous Office of Professional Standards.  Campello’s killing of the suspect who killed Adams had automatically guaranteed him a review by the board.  All police-action shootings, regardless of their merit, went before the IPRA.

“Last week, wasn’t it?” Silvio asked.  “Where’ve you been Tertwiller?”

She gave her partner a hard look.  “Who’s talking to you, dummy?” She patted Campello’s hand. “That’s good to hear, Frank.  We’re all here for you.  You don’t stand alone.”

“We’re family.  When one of us goes down, we all go down.  It’s always been that way and it always will be.”  She held out her fist and he bumped it with his. “By the way, how’s your dad doing?”

“As good as can be expected.  He’s more forgetful, but he seems to like Marimar and they treat him well.”

She smiled.  “Good. Again, let me know if you need anything.”

“I mean it,” she said, turning toward him even as she was walking away.  “You need help with your case load … paperwork … whatever.  Bill and I have your back.”

Bill was her husband and a detective with the 31st.

Silvio smiled and slapped him on the back.  “Excellent.  Five o’clock.  First round’s on you.”

He dropped himself into his chair and undid his tie.  His desk, like the others in the room, was nose to nose with his partner’s, an arrangement that facilitated communication.  Across the great divide, Campello could see Rand, sitting with his feet up and a smirk on his face.   Hey buddy, how ’bout them cubs, huh?

Campello reached across the desk tops and took Rand’s mug in hand.  The Cubs emblem was nearly worn off and the white ceramic cup was chipped and stained from years of coffee abuse.

He rolled the cup in his hands before putting it in the left hand drawer of his desk along with his pistol.

Campello stabbed the computer power button with his forefinger, brooding on old memories until the machine booted up and the CPD emblem emblazoned on the screen.  Then he opened a window to Adam’s case load; it was significant – weighty, even – and there was little doubt the district commander would re-assign some of them.  But Campello wanted to review them so he could have a say in which ones stayed with him and which went elsewhere.  The list represented a lot of effort and team work – and he did not relish the idea of losing control after all the time they had put into them.

He scrolled down the list and began by first making note of the ones that were set to go to trial.  He ran his finger down the screen as he copied the case numbers in a spiral-bound steno’s notebook, silently mouthing them to himself.  His hand stopped halfway down the list at an unfamiliar file number.  It matched no known classification, suggesting it was a dummy, something Rand had likely been working off the books, anticipating an upgrade to official status in the future.

Campello made a note of it and then circled it.  He would research it later.

“You got a minute Frank?”  He looked up to see Julio Lopez, the district commander.

“I was just going over some of Frank’s cases.”

“You can do that later.”  He pointed his chin toward his office.  “Come on back.”

Campello slid the notebook in a drawer of his desk and snatched his CPD mug.  He paused at the coffee maker to top off the cup.

“Close the door, will you?”  The boss said, settling in the chair behind his desk.

Campello pushed it closed and sat across from Lopez.  The office was Plexiglas on three sides, floor to ceiling, and both men felt their meeting being covertly watched by the entire crew.

“You have more time coming, Frank.  Take it if you need it.”

He shook his head.

Lopez’s eyes searched him, studied him, before accepting his statement on face value.  “Okay.  I guess you are.”

“Anything new on the shooting?” Campello asked.

“You mean, is there any new information?”

“No.”  He focused his gaze on Campello. “The IPRA cleared you.  Don’t worry about it.  You did the only thing you could.”

“Don’t.  Rand’s time was up.  There was nothing you could’ve done.  We all know the risk when we pin on the star.”

“Maybe.  But that doesn’t help much.”

Lopez sighed.  “No, I guess not.  But it’s true.  You’ve got two choices, Frank.  You can blame yourself for this, or you can see it for what it is and get on with your life.”

“I have to move on, Julio.  I have no life beyond the job.  I have nothing else.  The department is my family. The fact is I don’t belong anywhere else.  There’s no one at home so I’ve got no reason to stay there.”  He lifted the mug again, and then paused to grin over the top of it.  “God knows I haven’t done so well in the marriage department.”

Campello lowered the mug and set it on the edge of the commander’s desk.  “Four times for me.”

Campello crossed his legs.  “You didn’t call me in here to chit-chat.”

“No.”  He folded his hands, resting them on the desk.

“We’ve got a transfer coming in.”

“It wasn’t my idea.  It was arranged before Rand took a hit.  But with his passing, I thought you’d be the right guy for –”

Lopez sat back in his chair and ran a hand through his hair. “It’s Polanski.”

The flush of anger was immediate and Campello fought to control himself.  “Polanski?”

“The brass wants him transferred.  Since his allegations about the other shooting, the one in the thirty-first, he’s become too hot for them and a danger to himself.  The rioting there has escalated and they want him out of the district before he brings them any additional unwanted attention.”

“I want him to work with you.  At least until I can figure out what to do with him.”

The commander crossed his arms, his expression growing mulish.  “I need for you to keep an eye on him, Frank.”

The commander nodded toward the squad room.  “Those people out there respect you.  You’ve got a lot of time and a good record with the department.  There isn’t an officer in that room that wouldn’t walk into hell with you.  I need someone who commands that kind of respect to keep an eye on Polanski.  So far, we don’t have the rioting and unrest going on here that is occurring in the thirty-first.  Your killing of the suspect who gunned down Rand is justified in the mind of the public.  But if Polanski stirs up the same concerns here that he did in the thirty-first, we’ll see the same kind of trouble.  The brass doesn’t want that and neither do I.  I don’t think you do either.”

“What do you mean?  You’re the commander.”  His voice was rising.

“I mean I have bosses too, and they want him here and you’re open right now.  I can’t let him work alone.  I don’t trust him.”

“You’ve got to be kidding me.  You’re replacing Rand with Polanski?”

Lopez glanced toward the squad room and then leaned forward in his chair.  “I’m not replacing Rand with anyone.”  His gaze locked on Campello, his tone quietly emphatic.  “Stuff happens.  Rand’s gone and I have a new man who happens to be Polanski.  So you’re going to work with him, and you’re going to do it now, or you can take more time off and then work with him when you come back.”

“Work with a turncoat?  Are you serious?”

Campello stared at him in disbelief.  “When does this happen?”

Julio slid a note across the desk.  “We just got a call.  There’s a body at Navy Pier.”

But he no longer had Julio’s attention.  The commander was staring into the squad room at an immaculately dressed man standing just outside the office door.