Interview with Phyllis Schieber, author of ‘The Manicurist’ 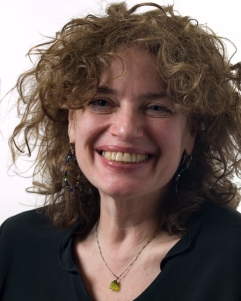 The first great irony of Phyllis Schieber’s life was that she was born in a Catholic hospital. Her parents, survivors of the Holocaust, had settled in the South Bronx among other new immigrants.  In the mid-fifties, her family moved to Washington Heights, an enclave for German Jews on Manhattan’s Upper West Side, known as “Frankfurt-on-the-Hudson.”

She graduated from high school at sixteen, earned a B.A. in English from Herbert H. Lehman College, an M.A. in Literature from New York University, and later an M.S. as a Developmental Specialist from Yeshiva University.

She lives in Westchester County where she spends her days creating new stories and teaching writing. She is married and the mother of a grown son, an aspiring opera singer.

The Manicurist was a finalist in the 2011 Inaugural Indie Publishing Contest sponsored by the San Francisco Writer’s Conference.

Phyllis Schieber is the author of three other novels, The Sinner’s Guide to Confession, Willing Spirits, and Strictly Personal. 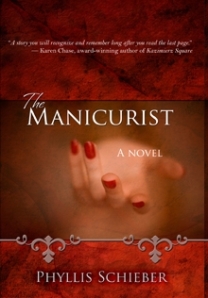 Q: Thank you for this interview, Phyllis. Can you tell us what your latest book, The Manicurist, is all about?

Tessa Emanuel is a manicurist with second sight that she contrives to keep from others, especially since her husband, Walter, does his best to deny it exists. Walter is determined to shelter their teenage daughter Regina from her mother’s complex legacy. At the center of the turbulence is Ursula, the mentally ill mother Tessa believed had abandoned her in childhood. When a disturbing new customer, Fran, comes into the salon where Tessa works as a manicurist, Tessa’s world is turned upside down. Secrets are revealed and revelations come to light as the family searches together for new beginnings.

I’m never aware of anything before I begin a novel other than the need to tell a story about something.  I typically have a concept that I want to develop, such as, in my other novels, the bond of friendship between women or secrets. In The Manicurist, I began with the idea of a manicurist who has prescience, and the story evolved from there. I have always been drawn to how second-sight manifests itself, simply because I believe that everyone is born with this ability. We simply don’t need to use it because technology has taken over for us, but the predisposition for is present in all of us. When prescience surfaces, there is always the potential for a great story. I just followed that likelihood.

Q: Your book is set in New York. Can you tell us why you chose this city in particular?

It is the place I am most familiar with!

No, not in this story.

On this page, Tessa’s struggle with her mother’s mysterious disappearance and alleged death is reinforced. In addition, Tessa’s mounting sense of urgency about Fran, the enigmatic new client who shows up at the salon, comes to a head when Tessa pays Fran a visit at her home.

This is an excerpt from Chapter Seven; it’s a flashback to Tessa’s childhood. She wakes to find her mother gone, something that occurs from time-to-time. Dennis, Tessa’s father, makes her breakfast and tries to reassure as they wait for Ursula to return:

“What about Mommy?” she said.

He checked on the bubbling batter, adjusted the flame again and scratched the side of his unshaven face, leaving a streak of raw batter along his right cheek Tessa noticed but said nothing.

“I don’t know about Mommy,” he said. “She gets funny like this once in awhile. You’re too young to remember the last time, but she was gone about three days. She went off to find God.”

The good and bad thing about Dennis was that he spoke the same way to everyone. It made no difference to him that Tessa was a little girl. He answered her question just the same as if she had been ten or twenty, or fifty or ninety.

“Did she find him?” Tessa said.

She held the butter dish in one hand and the bottle of maple syrup in the other and waited for an answer. Dennis frowned at the pancakes, adjusted the flame again and then steered Tessa to the table. He dressed the pancakes with butter and syrup and cut the stack into quarters before speaking.

“I think she found him and lost him again.” He moved the plate toward her and handed her a fork. “Eat, baby. They’re not as good when they’re cold.”

Tessa was surprised at how delicious the pancakes tasted. It did not seem right to enjoy them so much when her mother was gone. But the kitchen was warm, and she had her father all to herself. There was a peacefulness that Ursula’s presence never allowed.

He finished at the stove and set a plate of steaming pancakes on the table. He poured them each a glass of milk. Then he pulled up a chair right alongside hers and loaded up his plate,

fixed his pancakes just as he had done for her and ate. They finished their food in silence, wiping their sticky mouths at almost the exact intervals and making Dennis smile.

“Well, I guess you’re my girl after all.”

She smiled back because she did not know what to say, although she knew what to do. Her father’s large hand did not fit inside her two small ones. Dennis did not resist. Tessa sandwiched his hand between hers as if she had caught some odd creature and could not decide what to do next. Another child might have been daunted by the mere weight of the limp hand, but Tessa set it down in her lap and stroked her father’s palm with sure fingertips. They breathed rhythmically for a time until Dennis balled his hand into a fist and spoke.

She was just a little girl who wanted her mother. She covered his fist with her own small hands as if she held a crystal ball.

“Mommy will be home soon,” she said.

He kissed her forehead, touched by her need to reassure them both.

By the time the dishes were cleared away and Tessa had brushed her teeth and dressed herself, they heard Ursula’s key turn in the door. She looked calm and rested. More beautiful than either of them would ever remember her.

“I was slain in the spirit,” she said.

Ever so slowly and tenderly, Dennis approached her, almost as though he were trying to capture a butterfly. Ursula remained motionless as he drew her against his quivering body and whispered something in her ear that Tessa strained to hear. She knew it had something to do with her because her mother nodded and walked purposefully to her side and kneeled.

She was repeating the words Dennis had told her to say, but they were enough to console Tessa. She was just a little girl, and her mother was home. Nothing else mattered. Not even the feeling of dread she had experienced earlier when she touched her father’s palm. The feeling was almost identical to the one she felt when she held her mother’s hand for too long, like a warning burned into Tessa’s own heart, a scar that would never heal.

Q: Thank you so much for this interview, Phyllis.  We wish you much success!

Thank you. Please enjoy the trailer for The Manicurist!

2 responses to “Interview with Phyllis Schieber, author of ‘The Manicurist’”