Allan Leverone is a three-time Derringer Award Finalist whose short fiction has been featured in Needle: A Magazine of Noir, Shroud Magazine, Twisted Dreams, Mysterical-E and many other venues, both print and online. His debut thriller, titled FINAL VECTOR, is available February 2011 from Medallion Press. For details, please visit www.allanleverone.com or his blog at www.allanleverone.blogspot.com.

Q: Thank you for this interview, Allan. Can you tell us what your latest book, “Final Vector,” is all about?

Thank you for having me! In “Final Vector,” air traffic controller Nick Jensen’s life is turned upside down when his wife, Lisa, a Pentagon auditor, is killed in a car accident under suspicious circumstances after discovering potentially treasonous material on a fellow employee’s computer.  Desperate to escape the pain, Nick throws himself into his work and is on duty at the ATC facility serving Boston’s Logan International Airport on the night U.S. President Robert Cartwright is scheduled to fly into Boston.

Nick narrowly manages to escape capture when a band of heavily-armed terrorists storm the facility, but now must use the information uncovered by his dead wife to stop an assassination plot while outnumbered, unarmed and on the run… 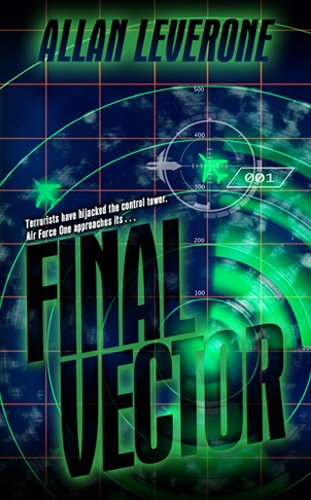 My main character, Nick Jensen, is a man in over his head. He is drawn into a situation he cannot quite comprehend and when the magnitude of what he is up against begins to dawn on him, he is forced to draw upon reserves of strength and character he never knew he possessed.

FBI Special Agent Kristin Cunningham plays a critical role in the book. She’s a study in contrasts—petite and quiet, she has been defying the expectations of others her entire life, a character trait which may serve her well when she needs it most.

Finally, the leader of my small band of terrorists, Tony Andretti, is the only member of the group not born inside the United States. He is a long-time U.S. resident who has been waiting patiently for the chance to strike a blow against the country he hates. When the opportunity finally comes, he is determined to make the most of it.

I think as an author it’s impossible to create characters of any depth without imbuing in them features we have seen in people we know or have been exposed to in some way. That’s not to say Nick Jensen is based on any one specific person, but rather the traits he exhibits may have been taken from a number of different personalities.

When I write a novel, I start with a general idea of what I want to have happen—the catalyst that drives the whole story—and where I want to end up. Beyond that, it’s up to the characters to take me where they feel the story should go. It’s kind of like starting a trip with a destination spelled out on your map but no clear idea of the route you’re going to take to get there.

Q: Your book is set in Merrimack, New Hampshire.  Can you tell us why you chose this city in particular?

The action in “Final Vector” takes place in a number of locations, including Boston, Washington, D.C. and the Arizona desert, but the climactic showdown takes place in the radar air traffic control facility serving Boston’ Logan International Airport. That facility is located in Merrimack. Rather than create a fictional location, I wanted to maintain as much realism in the book as reasonably possible.

Absolutely. In order for their plot to succeed, the terrorist group must understand as much as possible about the air traffic control system in general, and about Boston’s facility in particular.

It’s well past midnight on a lonely desert road southeast of Tucson, Arizona. A truck filled with Stinger shoulder-fired missiles is on its way to Fort Bliss, Texas after undergoing software modifications by the manufacturer. The truck passes two men hidden in the darkness and they block off the road, while a couple of miles away, the rest of the terrorists wait anxiously to put their plan into motion—they will hijack the truck and steal the missiles, critical components of their assassination plot.

The man behind her said, “Shut up. You’re not in charge here; we are. The only reason you’re still alive is because we can use you, but if you piss me off, I’ll shoot you in the back of the head right where you stand. One shot. End of pretty FBI agent. We can do what we need to do without you, so don’t go getting the idea that you’re going to stay alive just because you’re a cute little thing wearing a Windbreaker that says FBI on the back.”

Kristin swallowed hard and said nothing.

“That’s better, baby,” the man said mockingly. “Now, let’s do a little business, shall we?”

She didn’t answer so he continued. “We know that you need to coordinate with your superiors and notify them that everything is hunky-dory up here in the sticks before President Cartwright’s plane enters Boston’s airspace. Do that now.”

With mounting horror, it dawned on Kristin that the armed invasion had nothing to do with this facility, at least not specifically. It was all about Air Force One. These men were part of a much bigger plot involving the president.

Shaking her head, Kristin said, “Come on, guys. Be reasonable. You know I can’t do that.” She smiled at the man in black and then turned the same reassuring, high-wattage smile on the man stand­ing behind her.

He stepped around her and moved to the conference table, his gun never wavering. It was now pointed directly at her chest. With the pistol, he gestured at the cell phone hanging in a leather holster at her hip. “Make the call.”

She locked eyes with him. “I can’t do that.”

He nodded, taking two steps forward and then stopping. He was now standing directly in front of her, invading her personal space. He smelled of sweat and blood and death.

Kristin refused to look away. “I can’t do it,” she repeated.

Without another word, the man lowered his gun and shot her in the knee.

Q: Thank you so much for this interview, Allan.  We wish you much success!

As a debut author, it’s a challenge getting my name and my work in front of potential readers. Thank you for giving me the opportunity to connect with yours! Anyone who would like more information on “Final Vector” is invited to check out my website, www.allanleverone.com, or my publisher’s website, www.medallionpress.com.