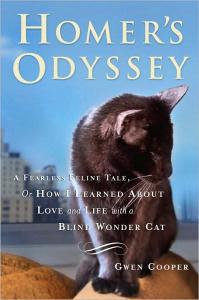 Homer’s Odyssey is the beautiful account of one blind cat and a woman who learned about life through the sightless eyes of a cat that was doomed (or so it seemed) from the beginning. In this first person narrative written by Gwen Cooper, the reader is taken on a journey into Gwen’s life as a single woman dealing with an underpaying job and a recently broken heart. Adopting another cat when she already had two was the last thing on her mind, especially a “special needs” cat.

But Homer turned out to be quite the opposite. Of all the books about dogs and cats on the shelf today, Homer’s Odyssey has got to be not only the best book I have ever read but also the most memorable one. As the owner of many cats in my past, I understand the personalities of cats, but Homer was beyond extraordinary. Take this for example:

“The first time I discovered his latest achievement was by accident. I awoke early one morning and stumbled into the bathroom. Flipping on the light, I fount that it was…already occupied. Homer balancing one the edge of the toilet seat.”

“Homer, in those days, was particularly enamored of playing with tampons. Having encountered one by chance, he was fascinated by the way they’d roll around, and by the string at the end. He liked them so much, he figured out where I kept them stored in teh cabinet below the bathroom sink and – with unerring patience and accuracy – mastered the task of forcing open the cabinet doow and rading the tampon box…When I walked in with my date, Homer rant to greet me at the door. And there, hanging from his mouth, was a tampon.”

Keep in mind this is a blind cat and this is only a very small part of his amazing abilities.

One part that was rather miraculous was not only could he scale seven-foot bookcases and leap five feet into the air to catch flies, but he was incredibly adept at chasing burglers out of Gwen’s bedroom and saving Gwen’s life.

The part that really touched me was when he survived being trapped alone for days after 9/11 in an apartment near the World Trade Center. Gwen frantically tried to get to him but no one was allowed in the area where the World Trace Centers went down. Here’s a bit from that:

“…I walked for more than three miles, and that entire time I didn’t see or hear another living soul – not a car, not a person, not a bird in a tree. It felt eerie, almost post-apocalyptic, as if I were the only living human left in Manhattan. I had never seen or even heard of a completely deserted New York City street. No matter how late the hour or how queit a neighborhood, there was always something or someone else – a woman walking a dog, a man delivering produce to a twenty-four-hour grocery stor, lights in windows. You were never so far from a jamor thoroughfare as to be unable to hear cars whizzing by like comets in teh distance. But now there was nothing but silence. Smoke and silence.”

A truly remarkable book and one in which I enjoyed tremendously.

Homer’s Odyssey is the once-in-a-lifetime story of an extraordinary cat and his human companion. It celebrates the refusal to accept limits—on love, ability, or hope against overwhelming odds. By turns jubilant and moving, it’s a memoir for anybody who’s ever fallen completely and helplessly in love with a pet.

For more information, visit the author’s website at www.gwencooper.com.  To purchase your copy of Homer’s Odyssey, click here to take you to Amazon.

One response to “Book Review: Homer’s Odyssey by Gwen Cooper”